What are the benefits of running DRBD in Diskless mode?

As the developers of DRBD®, LINBIT has led the way in high availability since 2001. DRBD has been included in the Linux kernel since version 2.6.33 (2009), has been deployed on all major Linux distributions, and is fully compatible with systems, applications, devices, and services. LINBIT specializes in block level replication, high availability, disaster recovery, and software defined storage.

In this blog post we’ll explore several options for providing storage across the network along with benchmark results. We will test replicated, high-performance, disk partitions that can be consumed by various virtualization platforms such as VMware, Hyper-V, XEN, etc. Access to the storage  can be remote (drbd-diskless/iSCSI) or direct. While iSCSI has historically been the go-to for network attached storage, we will show data that supports there is a better way; using DRBD in diskless mode.

8 NVMe disks on Node1 and Node2 servers were divided into 2 parts using mkpart. The first disk was created as a Volume Group with LVM without using VDO (Virtual Data Optimizer) with the first parts. With the second part, the VDO layer was created, then the Volume Group was created using LVM. VDO is below the LVM layer. LINSTOR is used to create, delete, or modify the volumes of DRBD. 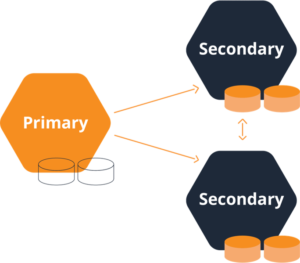 LINSTOR and DRBD versions installed to all servers are as follows: (DRBD versions were replaced during tests)

The test consists of several variables. DRBD version, method of accessing Disk, whether to use Single Thread or Multi Thread, VDO and Encryption, and a tuned DRBD.

In the light of all these values, the following FIO command was run for 5 minutes and a large amount of IO was sent to the disks. We waited 5 minutes between tests to prevent possible load problems. The parameters used in our FIO test are as follows:

Performance Tuning: In our tests, we aimed to increase performance by tuning DRBD configurations in the same way in every scenario. While it has been useful in some cases, it has proved disadvantageous in other cases. Our improvements in this regard are still progressing through additional development efforts. Below you can see the tuning parameters.

Thread Count: All scenarios are tested in Single and Multi Thread.

Deduplication: VDO is used for the deduplication layer in RHEL. It performs best when it is below the LVM layer and thus,the testing suite is following this recommendation.

Encryption: We attempted to use encryption in the tests. However, despite our efforts to utilize RHEL 8.2 and various kernels we were unsuccessful in getting it to work. While encryption was activated on the disks, processes were hung in the kernel. We will open a bug report with RedHat on this issue and follow up.

All obtained values and test results are represented in the table below.

·         Due to ISCSI limits, no matter which DRBD version is used, the performance cannot exceed a certain value. DRBD performance goes far beyond what ISCSI can offer.

·         DRBD-Diskless mode stands out as the most efficient option (including local disks) among all tests. 141k IOPS, which is the highest IOPS value received from a single resource, are captured with DRBD 9.1 and DRBD-Diskless (Accessing the resource from a different machine via DRBD protocol).

·         When using Multithreading, latency increases by approximately 1 ms per thread.

While replicating between scenarios in our tests, we examined the resource consumption on storage nodes. In all tests performed, there was no effect on memory.

In Test 1 and Test 3 Diskless mode, without VDO, DRBD produces 141K IOPS while consuming only 5% CPU.When we do the same tests on local disks, we see 7% CPU consumption. This shows us that it is more advantageous to use diskless mode instead of local disks, because the difference in IOPS between the two modes is approximately 2%.

When VDO is activated under the same conditions, the CPU consumption is 25% with Single Thread, while it is around 35% with Multi Thread. It is clear that the difference is because of the VDO. On the other hand, while ISCSI consumes between 13% and 15% in both Single Thread and Multi Thread modes, it can never exceed 35K IOPS level.

As a result, while the CPU load of DRBD on the servers does not exceed 5% even while getting the best results, the load increases because of calculations when VDO is activated.Conversely, ISCSI cannot approach 141K IOPS and 5% CPU value of DRBD diskless mode even while producing 35K IOPS due to its limitations.

Use case is about consuming replicated disks from remote compute nodes. The result we need to focus here is to find the test in which DRBD behaves best in terms of performance over a remotely accessible protocol. Under these circumstances it is most reasonable to access disks using DRBD 9.1 and drbd-diskless. As clearly seen in the table, the drbd-diskless performs better even in comparison with local disks. Every layer added to the disk is slowing down performance. While the VDO layer causes a loss of approximately 20%, it also creates a load on the CPU. The encryption to be activated in the same way causes some further loss of performance, but drbd-diskless protocol + DRBD 9.1 is able to meet the desired values even with VDO and encryption. In our tests, the iscsi protocol has clearly shown that it cannot be used here.

The maximum performance that can be obtained from each NVME drive is quite high. However, when the DRBD replication intervenes, the value drops 20/1. The reason for this is to control the CPU utilization of DRBD. Therefore, in the scenario to be established, instead of using a single DRBD resource between storages, activating separate DRBD resources for each VM will enable you to make the best use of the entire infrastructure. Especially in recent DRBD developments, serious improvements have been made for using multiple DRBD resources. It is known that around 6000+ resources are used in 1 cluster in one use case. This type of setup will lead you to use your infrastructure more efficiently and effectively in terms of performance.